Latest News
Home /As US, Russia and Saudi Arabia vie for oil dominance, the world needs to buckle up in preparation

John Kilduff of Again Capital said the Saudi-Russian alliance reacted too quickly to replace Iranian crude and it could again. “It’s making matters worse. It’s like an amateur trader. They’re getting sucked in at the market bottom and at the top.”

Saudi Arabia and Russia may also not be as close in their view on supply as their partnership would suggest. Russian oil companies have opposed the cuts, and Saudi Arabia is shouldering the bulk of them. Eric Lee, energy analyst at Citigroup, said Saudi Arabia envisions itself as a central banker of oil that helps stabilize the oil price.

“But there are a couple of flaws in that. One is that they’re not a dispassionate central banker that’s independent. They have their own interests. Their interests are that for their government spending, they need oil revenues. They would love oil prices in the $70s and $80s. That’s what it would take to balance their budgets,” he said.

“The Russians are separating from them as well. They need the Russians more than the Russians need them in many ways, there’s a balance but at least economically, the Saudis need $70 to $80. Russia budgets for $40 and the government is more insulated by the ruble,” Lee said.

Analysts said the partnership could ultimately eliminate its production cuts, and there’s an OPEC meeting coming up in April where production will be discussed.

“You have a couple too many cooks in the kitchen. Even as other people are running around doing their own thing, there’s a couple of dynamics,” Lee said. “How many more rounds do the Saudis try to cut or hold cuts to support prices in the near term. At what point might they see market share is being lost and at what point do they flip again?” Lee said. 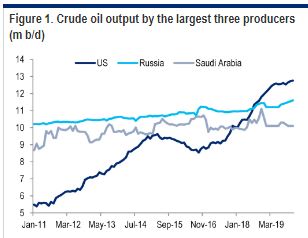 “There’s a benefit of Putin being extremely engaged as being an oil market kingpin, geopolitically and in the Middle East,” he said. “I’m not talking about a schism. It’s just when it comes to talking about whether to cut, the Russian position is much more reluctant to cut or hold cuts longer. Their industry certainly doesn’t want it, and the Russian government itself doesn’t need it anywhere as much as the Saudis do.”

But the U.S. production is also factor impacting prices. At 11.9 million barrels a day, the United States is producing 2 million more barrels a day than it was last year, according to weekly data from the Energy Information Administration.

“Out to 2023, prices might only need to be $45 to $60 because when you go above that or below that, you have too much shale or too little shale. It means whenever Saudis want to push prices out of that range, there’s going to be an opposite reaction to that that gives them trouble,” Lee said.

Kilduff said oil rose about 10 percent on the Venezuela sanctions, but it has also been swinging up and down on the rig count in the United States.

“I think they’re having a difficult time, the Saudis in particular, and OPEC with this new paradigm. They tend to overshoot both ways, and they kind of got suckered into putting more oil on the market because of the Iranian sanctions fears and they’re trying to rein it back in after the price collapse,” Kilduff said.