Do you want to know what the best fat burning foods are?

As in, which foods are going to increase your metabolism, melt away belly fat, burn tons of calories, reduce fat storage and make weight loss happen for you?

If so, you’re in luck. After reviewing nearly 50 scientific studies on this topic and interviewing 12 nutritionists, 16 obesity doctors and 24 diet coaches who work with men and women at every level, I’ve finally put together the ultimate evidence-based list.

So, without further ado, here are The 10 BEST Fat Burning Foods…

There you have it!

Be sure to run out to the grocery store today and buy every single one of these amazing life-changing foods so you can add them your diet and watch the pounds disappear!

Were you expecting something different?

Well, truth be told, I was considering making a legitimate list of the best fat burning foods.

But that was until I remembered one important thing…

There is no such thing as a fat burning food. 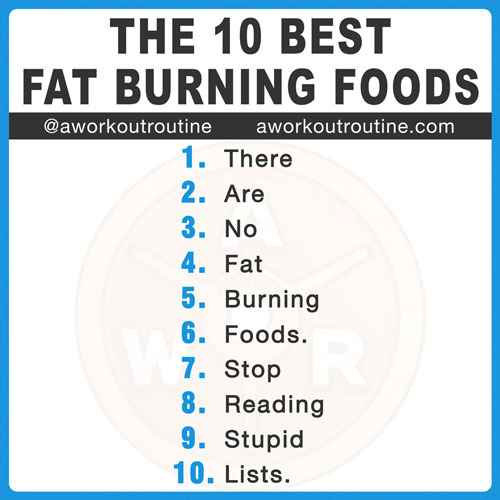 Oh, you’ve definitely seen real lists. Hell, I’ve seen them too. Probably thousands of them over the years.

The “10 Best” or “20 Most Surprising” or “50 Weirdest” or “101 Little Known” magical foods with magical powers for all kinds of magical purposes.

And it seems like thousands of new (or really, recycled) lists show up every single day, enticing you to click through to a website, read an article, open an email, buy a magazine, “like” a social media post, buy a product, stay tuned in to your local news report, watch the latest episode of Dr. Oz, or navigate through one of those torturous slideshow lists that force you to load the next page in order to view the next useless item on the list.

So yeah, the lists are definitely real. I’ve even written about them before (The Ultimate List Of Superfoods).

But the supposed “fat burning foods” that appear on those lists?

Those are all bullshit.

Why? Because foods don’t burn fat.

The Only Fat Burning “Thing” There Is

The only real fat burning “thing” there is, is a caloric deficit.

Meaning, when you consistently end up in a state where you are burning more calories than you consume (or consuming fewer calories than you burn… just two different ways of saying the same thing), your body will be forced to burn some alternative source of energy for fuel.

That alternative source of energy will be your stored body fat.

This, by the way, is the one and only way that fat is EVER lost (at least, without liposuction) from ANY part of the body. A caloric deficit is always the sole cause and requirement.

(For additional details on how this whole “calorie thing” works, check out my full explanation here: Calories In vs Calories Out)

“But What About The Foods We Eat?”

This is the point when you may be wondering what role the various foods we eat (or avoid eating) play in this whole process.

After all, if you’ve heard that certain foods are “fat burning foods,” there’s a damn good chance you’ve also heard that other foods PREVENT us from losing fat or are the underlying reason for we GAINED fat in the first place.

Wanna hear something funny about that?

You see, a specific food, food group or nutrient is NEVER the thing that makes us gain fat or lose fat (or stops us from losing fat).

And this all remains true regardless of what food sources happen to be providing those calories.

That list is bullshit. Stop looking at it like it’s a source of good information, because it isn’t.

There is no innate property present in any single food or type of food that gives it the ability to magically burn fat, make us gain fat, or stop us from losing fat.

That kind of thing doesn’t exist (“negative calorie foods” are bullshit, too), even if you come across stupid list after stupid list claiming otherwise.

Calories in vs calories out is always the key factor that determines this, and it doesn’t matter if the foods providing the “calories in” portion of this equation are the ones included on some shitty writer’s “bad” list or on some other shitty writer’s “good” list.

In fact, you could eat every single “fat burning food” you’ve ever seen on every one of these lists.

You could put cayenne pepper and coconut oil in your apple cider vinegar, mix it with some green tea, and follow it up with a handful of acai berries, blue berries, and whatever other berry some idiot is claiming to be a superfood this week… and guess what?

You’re still not going to lose an ounce of body fat unless you happen to end up being in a consistent caloric deficit.

You could eat the shittiest, junkiest, least healthy crap known to man and you’d successfully lose fat as long as a consistent caloric deficit ended up being present (see The Twinkie Diet and The Fast Food Diet for real world examples).

I’m not telling you this as a recommendation, of course. I don’t recommend eating this way at all.

If you’ve read Superior Fat Loss, then you know exactly what type of diet plan I consider to be ideal for both losing fat and overall health in general.

But I’m telling you this anyway, because it’s a fact.

And the fact is, fat loss and fat gain are dictated by calories, not the specific foods that supply those calories.

The fact that “calories in vs calories out” is the key factor behind things doesn’t mean that nothing else matters (a common straw man argument from the anti-calorie nutjobs of the world) or that the foods supplying those calories aren’t still important when it comes to losing fat (or just our overall health in general).

Because they most certainly are.

The way I’d describe it is like this: there is no such thing as a fat burning food, nor is there any food you are required to eat in order to lose fat… but there are indeed certain things that are more ideal for eating when fat loss is your goal.

What kind of things, you ask? Mainly these three…

Looking at this “list,” there are two important things to take note of.

A caloric deficit is the only thing that will ever make that happen, and these are all just things that can help a person better create that deficit and consistently sustain it.

In the end, that’s going to be the key to your success.

I know how appealing it is to see a pretty list of foods. It’s why people write these kinds of stupid lists in the first place, and then recycle them over and over again.

It’s laughably easy to do and it creates appealing content that people can quickly scan through despite the fact that the content itself is largely if not entirely a bunch of useless garbage that the person is going to forget ever seeing 20 seconds later.

I’m not doing that here.

Why? Because the specific foods themselves are NEVER the beneficial part.

Why? Because foods don’t do things.

It’s the calories, macronutrients and micronutrients they provide in the context of your overall diet that can have a beneficial (or detrimental) effect.

And the truth is, those beneficial nutritional qualities can be provided by dozens of foods and combinations of foods that YOU choose because YOU want to choose them.

Not because some stupid nonsense-based list chose them for you and claimed there’s something extra special about them.

How To Avoid Holiday Weight…